Don’t let that fierce-looking, jowly mug fool you—the English Bulldog is really a mellow mush-ball. Originating in 13th century Great Britain, these brave pups are now one of the most popular companion dogs in the U.S. No wonder: They’re loyal, friendly and easy-going, and they are equally at home in tiny apartments and sprawling suburban houses. Bottom line: These pups can make perfect pets.

They may be small and stocky, but Bulldogs, as the American Kennel Club calls them, can weigh up to 50 pounds—and that doesn’t prevent them from wanting to snuggle on your lap.

English Bulldogs originally were bred for bullbaiting, a “sport” that originated in Great Britain in the 13th century that set a pack of Bulldogs on a bull while people bet on which animal would “win.” That’s how this breed developed ferocious jaws, which are perfect for latching onto a bull and not letting go, and their fearlessness—the better for attacking bulls. When this bloody sport was outlawed in the mid-1800s, Bulldogs almost became extinct. But breeders decided to turn these gutsy fighters into loving companions and replaced their aggressive natures with sweeter, gentler characteristics.

They became the symbol of Great Britain, thanks to the bravery and resilience of the British during World War II and the prime minister at the time, Winston Churchill, who is said to have had a face like a Bulldog’s. They’ve also become the mascot for the U.S. Marines, Yale University, and countless sports teams.

You’d likely never confuse a Bulldog with any other breed, thanks to those jowls, loose folds and that stocky, compact body. But those aren’t all the attributes that give English Bulldogs their unique look: According to the breed standard, a Bulldog’s head should be big and look like it’s attached to the shoulders, so it appears as if the dog doesn’t have a neck. The ears, known as rose ears, are slightly folded at their tips, and the forehead should be flat. The short, compact, almost pushed-in muzzle features deep, broad chops (or lips) on either side of the mouth. 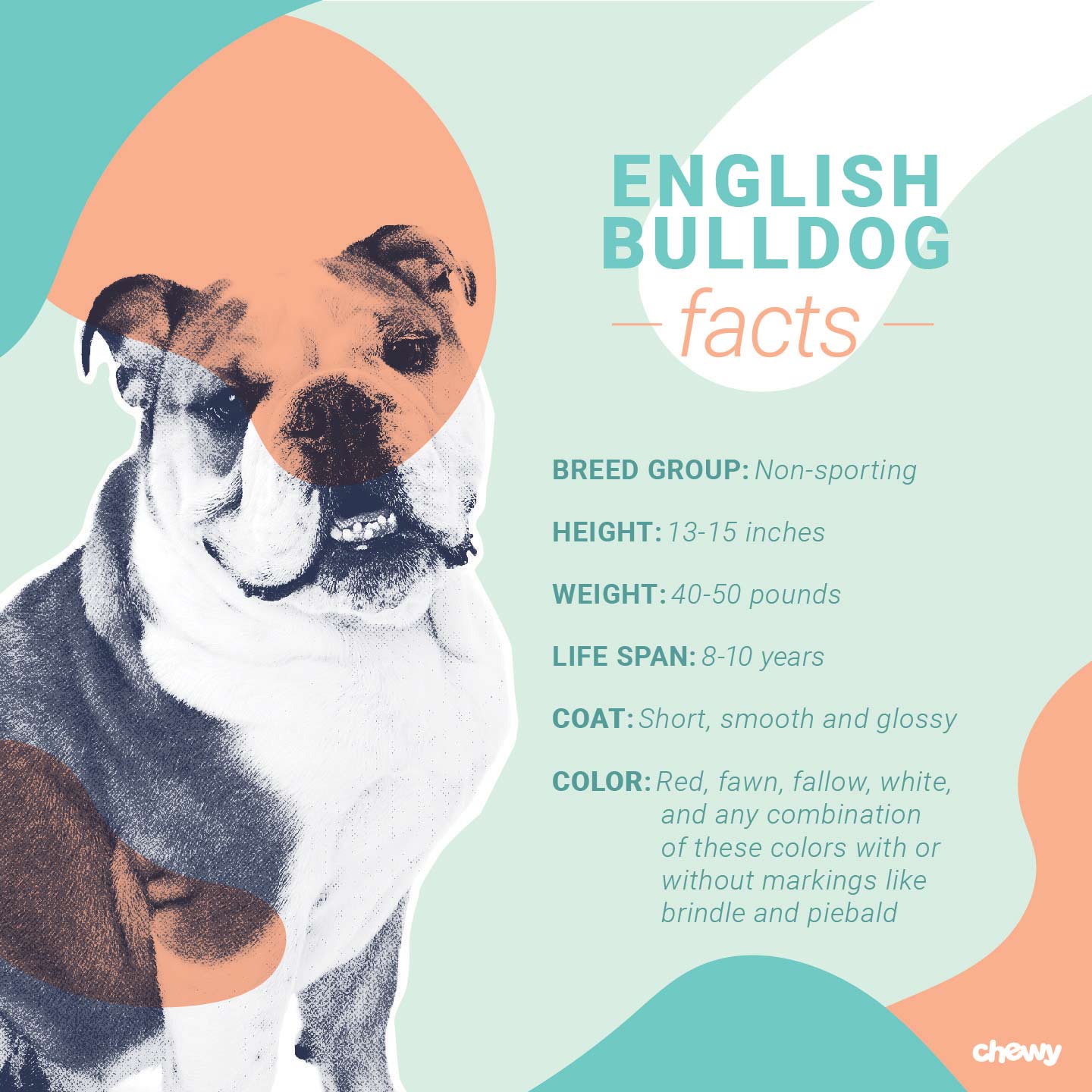 Known for their pleasant temperament, English Bulldogs are friendly with nearly everyone they meet, including children and other pets—though they may not always get along with unknown dogs. This smart breed can be quite entertaining as well. Some English Bulldogs figure out what amuses you and do more of it just to make you smile!

English Bulldog barking isn’t a huge problem (they aren’t an excessively vocal breed), but with their short, brachycephalic snouts, they do tend to snore. Like other brachycephalic breeds, they also overheat very easily. This makes English Bulldogs a great choice for people who don’t want to exercise their dog much, and especially not in warm weather.

Usually happy with short walks, English Bulldogs tire out fairly quickly during play. They need to live in an air-conditioned home and shouldn’t spend a lot of time outdoors when it’s warm—anything hotter than a pleasant spring day can be too hot for an English Bulldog.

Bottom line: If you’re looking for a sociable canine companion who will enjoy hanging out on the couch with you, an English Bulldog could be a great choice!

Keeping Your English Bulldog Healthy: 5 Issues to Look Out For

Unfortunately, the English Bulldog life span can be quite short due to the prevalence of several serious health problems in the breed. To maximize your pet’s health and longevity, make sure you only purchase pups from English Bulldog breeders who willingly provide you with the results of genetic and other types of testing that they have run on your potential dog and their parents. If you choose to adopt, be sure to get as much of the dog’s medical history as the organization is able to provide.

English Bulldog health issues that you need to be aware of include:

All English Bulldogs have a degree of brachycephalic airway syndrome (BOAS), which is characterized by a combination of the following anatomic abnormalities:

The typical symptoms of BOAS include noisy breathing, working harder than normal to breathe, difficulty exercising, a tendency to overheat and gagging. In severe cases, dogs may collapse due to low blood oxygen levels.

English Bulldog skin problems are also frequent ailments, and are often a result of allergies. The most common signs of allergies in dogs are general itchiness and recurrent ear and skin infections. Another common English Bulldog skin problem to watch out for is skin fold dermatitis. All those wrinkles around a Bulldog’s face and body can be breeding grounds for bacteria. Unless you keep them clean and dry, infections can occur.

English Bulldog eye problems are also quite common, and they can include dry eye (poor tear production), fur or lashes that rub on the eye, abnormal retinal development and cherry eye. With cherry eye, a tear gland moves out of place and is visible at the inner corner of the eye. Cherry eye usually can be corrected with a fairly simple surgical procedure, but it’s important to note that, like other brachycephalic breeds, anesthesia can be risky for English Bulldogs.

English Bulldogs are at relatively high risk for many types of orthopedic problems, including hip and elbow dysplasia—forms of joint degeneration that lead to arthritis. Patellar luxation (a kneecap that slips out of its normal groove) is quite common as well. Dogs with mild patellar luxation may just hold up the affected leg for a stride or two, but severe cases require surgery to allow the dog to walk without pain.

Heart problems also plague English Bulldogs. Many, such as pulmonic stenosis, tetralogy of Fallot, aortic stenosis, patent ductus arteriosus and ventricular septal defects, are present at birth. Others like mitral valve disease or heart base tumors tend to occur later in life.

This is obviously not a complete list of English Bulldog health issues. Hypothyroidism, bladder stones, congenital deafness, gastric dilatation-volvulus (bloat), spinal malformations, seizures and other conditions all also occur with some frequency in the breed.

Caring for Your English Bulldog

English Bulldog care includes the basic attention that all dogs must receive, but there are some specific things potential pet parents should keep in mind when it comes to caring for this unique breed.

Are English Bulldogs hypoallergenic? No, but no dog breed is truly hypoallergenic. To care for their coats, English Bulldogs should be brushed a few times a week with a soft brush, like the JW Pet Gripsoft Bristle Brush, and bathed approximately monthly to keep them clean. English Bulldog shedding isn’t excessive, although you can expect to see a bit of their short hair littered around the house.

Unless your veterinarian prescribes something specific, the best shampoo for English Bulldogs is often one that is gentle and moisturizing, like HyLyt Hypoallergenic Shampoo with Essential Fatty Acids. Skin folds may need to be cleaned a few times a week using antiseptic wipes, like Douxo Chlorhexidine 3% PS Pads.

As with any dog, nails should be trimmed when they get long and teeth should be brushed every day.

Learn how to properly brush your dog’s teeth here.

English Bulldogs are prone to obesity, in part because they can’t tolerate strenuous exercise due to brachycephalic obstructive airway syndrome. A high-quality diet that is not too calorie-rich often is appropriate. Products designed to help prevent or manage weight gain, like Blue Buffalo Life Protection Formula Large Breed Healthy Weight Adult Chicken & Brown Rice Recipe Dry Dog Food, can be good options. Grain-free diets are popular with many pet parents, but unless there is a genuine food sensitivity or allergy to one or more grains, a grain-free diet is not necessary.

Because this breed can suffer from excess gas production, some pet parents elect to feed a diet formulated for sensitive tummies, like Nature's Recipe Easy-To-Digest Chicken Meal, Rice & Barley Recipe Dry Dog Food. You also might consider breaking up your English Bulldog’s food into three or more meals to help reduce gassiness.

Breed-specific foods that combine many of these attributes are available for adults, such as Royal Canin Bulldog Adult Dry Dog Food, and for puppies, like Royal Canin Bulldog Puppy Dry Dog Food. The best food for English Bulldogs depends on many factors, so it’s a good idea to discuss your options with your veterinarian. The doctor also can help you determine how many calories to feed based on your dog’s current body weight, activity level and other factors for a well-rounded and complete English Bulldog diet.

Most English Bulldogs benefit from regular, but not very strenuous, exercise. Leash walking when it is not too hot is ideal, but watch your dog closely for breathing problems and/or overheating during any type of exercise. Unless closely supervised, swimming isn’t a great activity for English Bulldogs because their bulky front end makes swimming much more difficult.

English Bulldog training can focus on basic skills such as sit, down and coming when called, but given their size and strength, it’s also important to teach these dogs to walk politely on leash. A good front-clip harness, such as the 2 Hounds Design Freedom No-Pull Dog Harness & Leash, can help prevent excessive pulling while your English Bulldog is learning how to walk on leash. Then you can switch to the back clip of the harness once your English Bulldog has mastered polite walking.

English Bulldogs are smart, thoughtful and strong enough to resist force, which has given them a reputation for being stubborn. If you try to make your English Bulldog do something, you may not get very far. English Bulldogs respond very well to positive reinforcement training, though, so make sure  they get something good in exchange for doing the correct behavior. Once they figure out that they can “make” you give them the good stuff, they’ll be much more interested in doing what you want. For best results, keep English Bulldog training sessions short (especially at first), and use high quality, tasty treats, such as The Real Meat Company 95% Beef Jerky Dog Bitz Dog Treats, to help keep your English Bulldog’s attention throughout the training session.

While Bulldogs look distinctive, it’s that English Bulldog personality that makes them such a popular pet. If you’re looking for a laid-back, kind, courageous sidekick who’s just as happy lying next to you as they are walking by your side, you can’t go wrong with an English Bulldog.